SynchroNet Protects You from Hackers and Ransomware 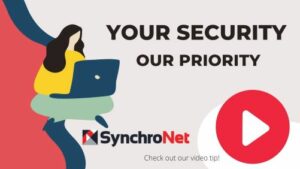 Many horror stories exist where business owners shrugged off internet security, and it led to heartbreaking consequences. People have lost entire businesses overnight because of ransomware that came in, captured their data, and locked them out. They threatened that if the business owner didn't pay the ransom, they'd destroy it all. You have cases where the desperate business owner even paid the ransom in an attempt to recover their data. Instead of returning the data, the sadistic hacker deleted the entire database. Never pay cyber criminals a dime. We have a better solution!

SynchroNet: Managed IT Services That Keep You Safe

SynchroNet, a managed IT company that protects its clients, will implement a cybersecurity plan for your business that will keep the hackers out. You never want to lose your business to someone who's game is to do destroy others. SynchroNet takes swift action against cybercriminals to keep you safe.

SynchroNet has a data backup plan in place as soon as you start working with us. If someone puts ransomware on your business data, instead of having to pay exorbitant fees that can reach up to $25,000, SynchroNet will return the data through the backup. It keeps things from snowballing out of control.

In some cases, business owners don't even realize how much damage the hacker did. They may have demanded payment from all your vendors, they may have stolen confidential employee information and they may have scammed others into paying for things by pretending to be the executive.

SynchroNet lowers the risk that you would suffer this kind of data breach, and minimizes any damage a hacker could unleash on your company If a hacker manages to get away with thousands of company dollars, you will have a long road ahead of you with the insurance companies. You can only hope that they will cover you. SynchroNet provides the best protection for your information.